Are there any American football fans here? To cool down your emotions during intense sports games, we have for you a limited edition of the famous Salamander AIPA, from Browar Stu Mostów. The same composition, as always, beautiful taste and aroma, dressed in the colors of the football team - Panthers Wrocław, with which the brewery has the pleasure to cooperate. Now, emotions will flow not only from the pitch, but also from the can!

Although the origins of the IPA style go to the British Isles, it is the American version of this top-fermenting beer which has become the legendary brew of the craft beer revolution. Stronger than Pale Ale in every aspect: higher extract, more malts, darker colour and definitely more hops. Our AIPA is already a classic in the new wave craft brewing representing the Eastern bay tradition; slightly darker with clear malty foundations brewed from an impressive amount of new-wave American hops.

Hops account for the unique aroma of this brew. The bitter Columbus variety produces citrus bitterness that can be found in the albedo of citrus fruit. Yet, the most important ones are aromatic hops. While brewing, Mosaic gives intense tropical fruit flavours, specifically papaya and mandarin. During the ageing process, we add the uniquely citric variety of Citra, which releases the aroma of gooseberry, grapefruit, lime, and lychee.

The narrowing rim of Tulip, Sensoric or IPA glasses allow for the hoppy character of the beer to show best. It’s a good idea for the beer to warm up in order to release aromas not produced in Lower temperatures. This style is always best fresh as hoppy aromas may at times lose their intensity.

The most interesting pair is to serve this beer style with spicy cheese with mould formation such as Gorgonzola or Roquefort. High bitterness level of AIPA style beers intensifies the spicy flavour and smell of these cheeses. It is recommended to serve the beer with dishes containing these cheeses such as pasta, pizza, or burgers. Spicy dishes, specifically Thai or Nepalese cuisine. Moderately sweet fruit desserts which do not taste too bland taking into account the hoppy character of this beer.

Brand
Browar Stu Mostów
Style
American India Pale Ale
Type
Pale Ale
ABV [eng]
6,8%
BLG
12°
Container
Can
Best before
14.12.2022
IBU
63
Capacity
440 ml
Country
Poland
Zalecane warunki przechowywania
temperature: 5°C - 22°C
Purpose
For direct use
Allergens
According to the information on the label
Do you need help? Do you have any questions?Ask a question and we'll respond promptly, publishing the most interesting questions and answers for others.
Ask a question
Ask a question 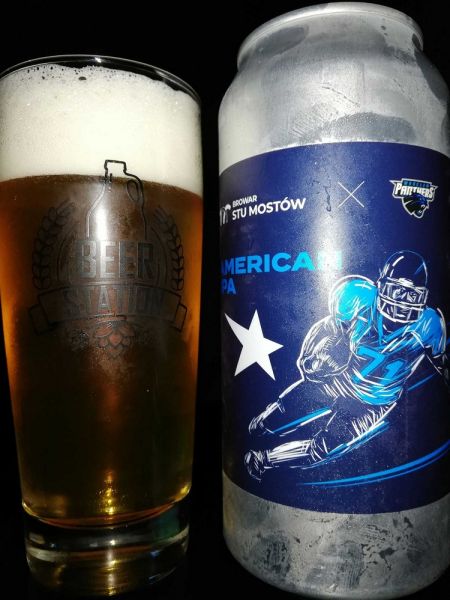 4/5
Caramelly malty flavor dominates, with piney scents and citrusy tones thrown in, crisp, sweet and oily. Smoothly tickling resinous bitter notes ride atop. Higher ABV is quite immersed. Deliciously bodied collab awaits here!!!
2022-09-02
Richard, Bratislava
Was the opinion helpful? Yes 0 No 0
There are no opinions with this number of stars.
Write your opinion